If you’re after info about HOBOFOPO2022, click on that thing top right. Because we aren’t good at webpage design stuff, so it’s stuck on 2021 year. Just go click that button thing on the toolbar and hit HOBOFOPO2022.

Below is last years news. don’t read below unless you’re feeling nostalgic. thanks.

Is there a festival where folk music such as Darren Hanlon and Ben Salter sits perfectly along side punk music such as Flangipanis and This Is A Robbery? Yes there is.

Since the launch party for Folk Til Ya Punk Records in 2015, folk-punk musicians and fans have been making an annual pilgrimage to Hobart for a pub crawl of rowdy acoustic punk singalongs. From 2016 it had become a 4 day event and they named it HOBOFOPO. In 2020 the plague hit and they scaled back to just one gig. In 2021 they are reinvigorated and are going for it again.

Given the uncertain times, things are a bit stripped back,with 3 days of pub crawling (instead of 4), and artists from just 3 states (instead of the usual 5-6).

It’s not all folk-punk this year, with a good splattering of folk acts and punk acts throughout the diverse lineup, made up from three states (sorry VIC and NSW, but you can tune in to the livestream event).

This is the 2019 line-up. Please see above note and go to this Page: http://www.folktilyapunk.com/hobofopo-3/

The full HOBOFOPO experience consists of:

Fri 19/11 5-11pm – private house show, Grove. For festival pass holders or invites of the host only.

and the full lineup is:

After years of touring the far flung corners of Australia and the greater world, Darren Hanlon has carved a sacred place in the hearts of many who cross his path with his candid and charming music and storytelling. He is known for his engagement with his audiences and having the ability to make a large crowd feel like they’re in a lounge room amongst friends.

Not deterred by the Covid situation Hanlon has managed to have a rich few years, appearing in and singing the credits of the new Slim Dusty bio-pic Slim & I and garnering high rotation on ABC with his pandemic themed song ‘We All Cope in Different Ways.’  He is also releasing what will be his 6th studio album ‘Life Tax’ (Jan 2022) written and recorded in the Uniting Church Hall, Northcote with his new band consisting of some of Melbourne’s indie elite: Leah Senior, Jesse Williams, Zoe Fox and Dylan Young. It’s his most stripped back and narrative driven album to date and features the single and already crowd favourite ‘Lapsed Catholic.’”

Flangipanis are a party punk Brisbane 4 piece renowned for their cheeky and melodic fuck-you anthems. The band has toured nationally for a decade and developed into a stalwart of the Australian independent punkrock scene. After 7 studio releases, the sound has solidified into their now-identifiable style – loud, honest and openhearted.  These larrikins love a drink and a laugh as much as they love to play, and that spirit radiates through their content and live shows. If you’re wondering how a fuck-you can be endearing, chuck on a Flangipanis record.

Flangipanis will hitting Tasmania for the first time ever for HOBOFOPO, and will be bringing a brand new album with them.

With a folk punk career originating at the first Hobofopo (2016), this November Quinton Trembath (SA) will be going back to his roots, performing stripped back (with long-time collaborator, Hannah Morrell), offering the die-hards a nostalgic treat, playing in-full, the two early EPs that fast became crowd favourites. “Good days, These days” and “Souviners” were both released in the prolific year of 2017 and produced a majority of the big singalongs crowds quickly grew attached to. The songs from these two releases exude positive energy, telling intimate and detailed stories through joyously yelled anecdotes with melodies sure to get stuck in your head. A set filled with songs that act as both tour travelogues & summer anthems, the performance should bring a lot of genuine feel-good smiles to a time that desperately needs it.

“I can’t help but be charmed by Quinton’s energy” – Dave Ruby Howe of Unearthed.

A Queensland export is a Tasmanian import. From bands such as The Gin Club and The Wilson Pickers, Ben has recently been locked in the depths of MONA creating music. He’s been let back outside now, and so the lauded, applauded and awarded songbird will serenade us on the Sunday session.

Soursob Bob released his first album, Living in the Long Grass, back when the Twin Towers were still standing in New York. Since then, there have been many other Soursob Bob recordings and notable international events.

His songs are up-beat, down trodden, lyrical, nationalistic, personal, serious songs, with humour. As Dan Bern, American songwriter, observes, “if you must put me in a box, make sure it’s a big box…”

Soursob cites The Bedridden and Baterz as influences, as well as Banjo Patterson.

The rowdy band at the folk festival, or the acoustic moment at the punk show, The Dead Maggies straddle the folk-punk genre proudly. They’ve taken their lively cacophany of historical Tasmanian oppression on four international tours, including the 60,000 capacity Boomtown Fair in the UK, and being the first international band hosted by Indonesian Celtic Punk.

Much like the Tasmanian landscape, the ensemble is wild, rugged and scarred by the impact of suburban influences. Yet to be sanctioned as the only boy band to boast a bones player, this is Rogue Folk at it’s darned finest – brutal, impolite and highly danceable. 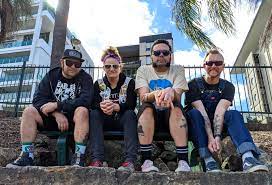